Learn how to create games for smartphones and PCs, register them on the Google Play Market.

Now it is difficult to find a child who has never played computer games. But many of them do not even suspect that behind a beautiful picture and an interesting plot, there are hours of hard work and creative ideas of many talented programmers who receive good money for their work.

Our course on creating computer games online is an opportunity for a child to go “beyond” the game and understand that its development can be as exciting as the game itself.

Why enroll in a course on creating computer games?

The purpose of our course is to show children how modern games are created. And gradually, but clearly and convincingly, convey the idea that the creativity of developers is no less exciting than the game itself.

Education gives the child the opportunity not only to master programming skills, but also to improve themselves in the following areas:

✓ Ideas. Game development starts with an idea. Before the child chooses that very single concept, several dozen ideas will be born in his head.

✓ Creativity. Thinking through the plot, the picture, the capabilities of the character, great turns on the imagination, which, in turn, is the basis of non-standard thinking.

✓ Discipline.  While creating computer games for kids is fun, it still requires a certain level of discipline.

✓ First step in IT. Learning to program computer games makes a child interested in IT technologies in general and motivates them to try different programming languages.

Outcome of training — knowledge and skills to develop games on professional platforms used worldwide. The finished game product can be placed on your phone or computer, and then added to the official Google Play Market for free download or sale.

Training is individual, one-on-one with a teacher. 100% of the time only to your child.

The first lesson is free! Show your child that programming is cooler than playing!

Register for a free lesson

What is Construct 3; Studying the program interface; Adding landscape;

Creating your own worlds;

Game tasks; Creating your own landscape; Studying the movement of objects;

Scoring and work with sound;

Timers and scoring in the game; Working with sound: Study of all possible options;

Addition of the second player;

Creation of new worlds and landscapes;

Creation of a new world; Choice of genre and plot of the game; Landscape development;

Accrual of points in the game;

Creation of clones and generated objects; Creation of indicators of lives; Accrual of points for the action of objects;

Development of a new own project;

Work on the game "Fortuneteller";

During this course, your child will:

Learn how to create games for computers and mobile phones, and upload them to the Google Play Market;

Get an excellent base that will allow you to learn any other programming language;

Visually see the work of software algorithms in action;

Will create more than one own project to consolidate the material.
Register! THE FIRST LESSON IS FREE.
MAYBE YOU ALSO INTERESTED IN 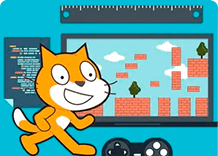 SCRATCH PROGRAMMING
Let your child learn the basics of programming in a playful way by creating their own programs and games in Scratch by dragging and dropping blocks like Lego.
More 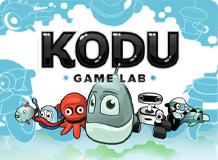 PROGRAMMING ON KODU GAME LAB
With Kodu, kids can create 3D games with different characters and landscapes. Do children need to know any programming languages for this? Of course not!
More 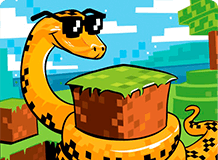 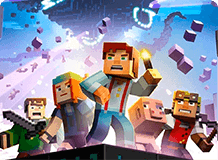 MINECRAFT PROGRAMMING
Is your child a fan of Minecraft? It's great! The world of Minecraft will help him take his first steps into the world of programming and learn the basics of Python.
More 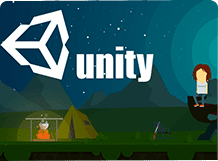 CREATING 3D GAMES ON UNITY 3D
Is your child stuck on the computer? Why not become a developer? We will help you figure out how to create realistic 3D games and learn the C# language.
More

It is difficult to find a children’s tablet or gaming computer on which at least one game has not been installed once. Thanks to the cross-platform function, we can play at home on a computer and continue without interruption on a mobile gadget. But to get the finished product in the form of a game, many stages were done: from writing it to the stage of preliminary testing and official release. But it’s hard to even imagine how many hours the developer spent at work in order for gamers to get a brand new computer shooter. The courses will help the kid learn to program, understand the algorithm for creating games, and even create their own.

Our course and its benefits for your child

The itfuture course on creating computer and mobile games will help you take the first steps towards game design. The course program includes not only the theoretical part, but also the creation of your own project. So after the end of the course, the child will have his own development for the “portfolio”. Education will provide an opportunity to discover programming, understand what kind of profession it is and develop such qualities:

Creating games is a good school to start your journey in the IT field. Soon after completing this course, the kid will be easier to perceive more complex areas, programming languages ​​and other aspects of the profession.
This is a chance to start your child’s school year with an investment in the future. And maybe your child will become one of the most successful programmers. You have the opportunity to register right now on our website. Training takes place online one-on-one with a teacher. This will allow the teacher to teach productively and devote time only to your child. If you want to learn more about the format and curriculum, you can contact us at the numbers listed on the site and sign up for a free trial lesson.

Call respect at the time of registration: